President David Granger, speaking on the sidelines of the opening ceremony for Caribbean Financial Action Task Force’s (CFATF) workshop for judges and prosecutors today, said the recent pirate attack, which left sixteen fishermen missing off the coast of Suriname, was a grave one. 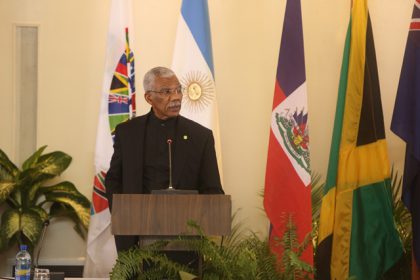 President David Granger at the opening ceremony of CFATF’s workshop for judges and prosecutors.

The Head of State extended sympathy to the bereaved families and said the recent attack on what is believed to be mostly Guyanese, is a setback to successes achieved in the fight against piracy over the past three years.

“We have been very successful over the last three years in curbing piracy. So, this has come at a great setback. At the moment, we do not have all the information, however, we are in touch with the Surinamese government. There will be a public statement made, hopefully, by tomorrow when the Minister of State gives his press briefing.”

A piracy attack, off the Atlantic Coast of Suriname Friday last, left 16 fishermen missing and feared dead. According to four survivors of the brutal attack, the assailants suspected to be of Guyanese heritage assaulted them with machetes and forced them to jump into the sea.  Some of the survivors recounted that several victims had batteries tied to their legs.

Suriname’s Minister of Justice and Police, Stuart Getrouw recently announced that the Surinamese government will continue their search for the missing fishermen. Surinamese news agency, Star News, reported on its website that there are plans to deploy a plane to assist in these search efforts.  Three bodies of the 16 missing fishermen were salvaged Wednesday night by the Coast Guard and members of the maritime police.