The prime minister was speaking at a community meeting at Whim, Corentyne. 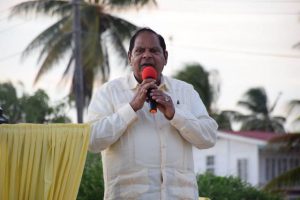 He recalled that during his tenure as Minister of Local Government, under the very PPP back in 1994, it was the vision of the government to allow “grassroots democracy”. However, the prime minister said that since 1994, the PPP government never facilitated another Local Government Elections (LGE) in Guyana.

According to Prime Minister Nagamootoo, the opposition’s abuse of the local government system continues, since, although it is in control of 15 Local Authority Areas (LAA), very little developmental works are being carried out.

He said the opposition is fully aware that in a “couple of months from now” Guyana will be one of the richest countries in the world.

The Prime Minister called on residents to not be tossed about by the rhetoric of racism.

“We have many things to be proud of in Whim Village; they should not turn our minds because of race.”

He reminded residents that both himself and President David Granger attended the Auchlyne Primary school a village away.

“The world today would be proud to know that in this little part of the globe called Whim Bloomfield, a small school named Auchlyne Primary produced both the President and Prime Minister of Guyana.”