Residents of several Region Nine communities, more especially the youths will benefit from better recreational facilities as upgrades continue on them. 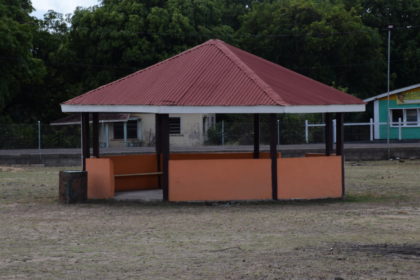 A benab in the J.E Holiday Park in Region Nine

The J.E Holiday Park, the Mayflower Children’s Park, the Wadapna Community Centre ground and the Tabatinga Sports Complex ground are being upgraded.

Speaking on the JE Holiday Park, Mayor of Lethem, Carlton Beckles noted that, “We enclosed the entire area with proper fencing, installed lights, some rides, a sanitary facility, and a benab.” He said the vision is to develop the park with more facilities such as a skating area, a multipurpose tarmac and a garden for beautifying purposes.

“We are looking at having a stage in the event anyone wants to use the facility for any sort of children’s entertainment,” Beckles explained. Also there are plans to have a small football field, and basketball and volleyball courts. However, Beckles noted that they would not cost as much as the skating rink and tarmac, but he is hopeful it can all be done this year. The lights are on from 18:30 hours to 22:00 hours to facilitate persons in the evening.

The Mayor further stated that the, “Park is not quite finished but definitely it’s usable…so that they (residents) can have their kids in there to have fun.”

With regards the Mayflower Children’s Park, which is situated in Culvert City, the Mayor said, “We have finished the benab, a tarmac (size 70 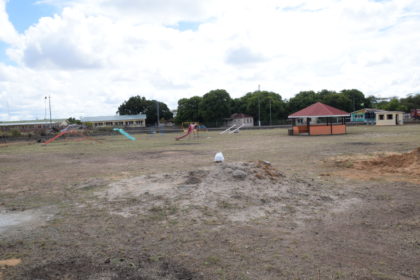 There are plans to have lighting around the facility soon, so that persons can use the park at night. Fibre glass rides will also be installed with subvention funds during the course of this year. In addition to that, Beckles said, assistance will be sought from residents to further develop the park.

A document will be prepared soon to outline the laws and regulations of the parks THE Mayor added.

The Wadapna Community Centre Ground and the Tabatinga Sports Complex Ground are set to be upgraded with much needed facilities to become the region’s secondary and primary sporting facilities, Beckles said.

At the Wadapna Community Centre Ground, currently washrooms are being installed, and the fence is being repaired. Flood light lamps have been installed, and plans are to have more lights erected, Beckles explained.

Meanwhile the Tabatinga Sports Complex Ground is set to be the primary facility in the region. Thus far, it has been enclosed, and the front has been concreted. This part will be rented by spots for persons wanting to advertise their products or services, the Mayor said.

Four washrooms have been built and there are plans to have a similar number put in place.

Three wooden (80 by 25- feet) stands are to be built to facilitate vending in the ground. Infrastructural works are well underway on the building to facilitate a second storey. “The upstairs will be used as a main pavilion and also used as a club house where (it) would have sort of indoor activities that would take place there during the course of the evening,” Beckles explained.

The grounds will be ploughed and shaped during the course of the upcoming rainy season. A multipurpose tarmac is to be built, as well.

“We want to bring this ground up to a usable standard, it might not be finished in time for the inter-branch athletic championship in the region,” the Mayor pointed out, but by year- end it will be completed. 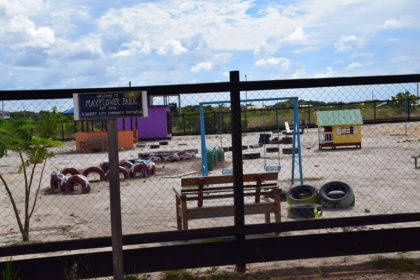 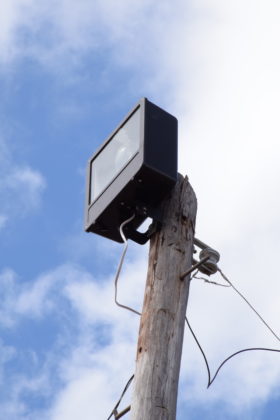 One of the lights at the J.E Holiday Park