Vice President and Minister of Foreign Affairs, the Honourable Carl Greenidge, will tomorrow, Tuesday 25 September, join Heads of State and Government to discuss ways to make the United Nations more relevant in the 21st century.

He is leading a delegation to United Nations Headquarters in New York to participate in the General Debate of the 73rd Session of the General Assembly Session, annually convened by the world body. This year, Member States will frame their remarks around the theme, “Making the United Nations relevant to all people: global leadership and shared responsibilities for peaceful, equitable and sustainable societies”.

Minister Greenidge is scheduled to address the General Debate on Friday, 28 September. 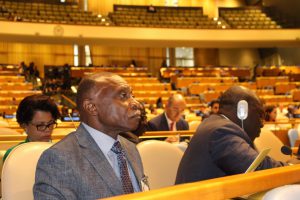 The Honourable Carl Greenidge, Vice President and Minister of Foreign Affairs at the 72nd Session of the United Nations General Assembly

Guyana’s priority issues at this year’s Session are the Guyana/Venezuela controversy, climate change, green state agenda, oil and gas issues, and the reform of the UN Security Council.

Over the next several days, the delegation, which includes Minister of Natural Resources, the Honourable Raphael Trotman, and Minister of State, the Honourable Joseph Harmon, should be engaging with a number of partners, such as Norway and Côte d’Ivoire, on a bilateral level.

Significantly, while in New York, the team is also slated to meet with United Nations Secretary-General Antόnio Guterres.

Before departing Guyana, Minister Greenidge indicated that the opportunity will be provided to Guyana to meet Mr. Guterres to discuss developments relating to the Guyana/Venezuela controversy, following the latter’s decision to refer the matter to the International Court of Justice (ICJ).

Furthermore, Guyana is one of several countries elected as Vice-President of this Session.

Accordingly, Minister Greenidge today presided over the afternoon session of the Nelson Mandela Peace Summit, which is being held to mark the late South African icon’s 100th birth anniversary and to promote the ideals and values that he promulgated.

Other meetings and events in which Guyana will participate on the margins of the General Assembly Session include the CARICOM Council of Foreign and Community Relations (COFCOR) and the Commonwealth Foreign Ministers meeting.