We are ready for elections!

─nothing will upset the Coalition govt at this time – PM Nagamootoo

“We are ready for elections … we are ready to hit the road,” firmly stated Prime Minister, Moses Nagamootoo.

The Prime Minister spoke with the Department of Public Information (DPI), following Tuesday’s Cabinet meeting in Bartica, Region 7.  Earlier that day the Caribbean Court of Justice (CCJ) handed down its decision on the December 21 vote in Guyana’s National Assembly.

The CCJ ruled that the December 21 (2018) vote was validly passed with a majority of 33 of the 65 seats of the National Assembly.

However, even as this was the case, Mr. Nagamootoo reiterated that the government remained confident in the development it has implemented since coming into office in 2015.

He cited the recent International Monetary Fund (IMF) report as evidence. “It speaks highly of the progress made by Guyana; the economic growth in this country,” the Prime Minister outlined.

The IMF has projected a 4.4 percent growth in Guyana’s economy. This it reported will remain steadfast, driven by continued strength in the construction and services sectors ahead of oil production in 2020.  For 2018 it said Guyana saw a growth in real GDP by 4.1 per cent, up from 2.1 per cent in 2017.

The Prime Minister related that government has invested enough in the last four years, to command the respect of the people of this nation.

In the meantime, he noted that government engaging in due process, is evidence that it stands ready to accept the ruling of the CCJ. However, the Prime Minister underscored that no one will be disenfranchised; fresh elections will be held with a new voter list.

“Even as we would want to have fresh elections the voters list expired on the 30th of April.” … “We need a new credible, authentic voters list, we don’t want to lock out our many young people who have not been registered before, in fact, everyone has to re-register.” 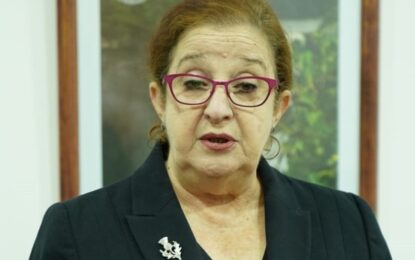 “We are here to deliver”- Minister Bishop...