Minister within Ministry of Public Health Dr. Karen Cummings expressed her desire to reform the West Demerara Regional Hospital to its former glory.

This was highlighted during a meeting on Thursday, with the hospital’s department heads and representatives of the Regional Democratic Council about the health care delivery offered at the facility.

The minister said that the image of the hospital has been comprised due to numerous incidents and this will have to be addressed by government. She requested the regional hospital’s department heads to inform her about the challenges faced and proffer solutions to address the issues at hand.

Acting Regional Health Officer (RHO) Dr. Bibi Jabar, informed the minister that due to a lack of human resources in the theatre, x-ray and pharmacy departments, some services offered at the regional hospital are not provided on a 24-hour basis.

Inter-Ministerial Sector Coordinator within the Ministry of Public Health, Mr. Seewchan, in response to the issue of a lack of human resources, explained that the matter is currently pending and with the cooperation of the Ministry of Public Service the gaps at the hospital should be filled by a number of pharmacy assistants who have recently graduated.

He added that in another month’s time the positions will be advertised and filled since the regional administration is responsible for that aspect of the hospital. However, he is adapting a holistic approach not only filling the openings in the pharmacy but other departments which also suffer.

The coordinator stressed that he hopes that the regional administration can expedite the vacancy process so that the positions can be filled quickly. He suggested that, “in the interim until we (the regional hospital) have the persons appointed, we (Region Three) have pharmacists placed in various health centres, we can ask them (Minister with your intervention) once we can remunerate and ask them to be on a shift system….to provide this service at least to 11(pm) on roster”. 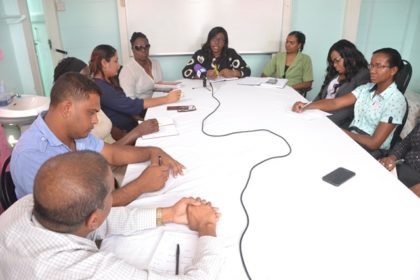 Minister Cummings explained that though it is an excellent initiative suggested by the coordinator, it will create some issues considering the labour laws, noting necessary steps will need to be taken care before confirming such an initiative.

Deputy Regional Executive Officer (DREO) Jennifer Ferreira-Dougall emphasised that since her placement at the regional administration, the lack of human resources has been an on-going issue. She pointed out that the process has stalled whilst at the Ministry of Public Service stage.  Noting that she understands the ministry has a heavy workload but the placements need to be addressedin the West Demerara Regional Hospital for proper delivery of services.

Additionally, The Regional Hospital Administer(ag), Sanjay Persaud highlighted that lack of maintenance of the hospital’s medical equipment has created an issue extending for six to seven months. The acting RHO noted that the hospital’s biochemistry machine has been out of commission for one year since they are unable to attain a qualified technician to service the machine.

Minister Cummings stressed that the ministry is working assiduously to devise an agreement with the manufacturers they procured the equipment to also have the equipment serviced. She noted that the inclusion of a biomedical engineer from, either Cuban or Chinese medical team will help to fill the gap until further notice.

The coordinator however explained that there are seven biomedical engineers who would be able to do comprehensive assessment to provide a report before month-end.

The minister noted that the government has trained 10 logistic officers, one of whom is assigned to Region Three, who are capable of handling the management of a stock system, who will in-turn train the region to fix the issue.