After three weeks of adventurous knowledge-based trips around the country, the last stop for the third instalment of the Youth in Natural Resources (YNR3) Apprenticeship Programme, was at the Baridi Benab, State House, where the 28 young people graduated and were inducted into the YNR Alumni Association.

The Young Eagles, as they will now be referred to, were on Friday given a special charge by His Excellency, President David Granger. 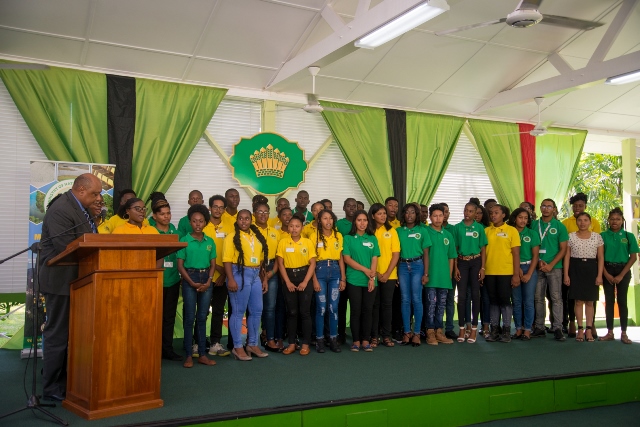 “I urge you to continue to protect this beautiful land of Guyana,” the Head of State said.

In the last three weeks of the YNR-3 programme, the young people travelled to some of the largest gold and bauxite mining operations in the country, these include among others; Bonasika Mining Project in Region 3 and Aurora Gold Mines in Region 7. In the process, they also learnt about biodiversity, protected ecosystems and environmental protection.

This year’s contingent is the largest since the initiative started three years ago. And receiving a badge of honour itself, the programme got a thumbs up from President Granger.

“I commend the Ministry of Natural Resources on mounting this innovative programme. I congratulate you the students on the completion of this programme, and wish you every success in your future,” the president stated.

During his feature address, President Granger was also keen to point out that as citizens, everyone is a trustee and must protect the country’s patrimony.

“Natural resources are not confined to the extractive industries; natural resources include renewable resources such as our forest and biodiversity. All, natural resources, all of them, are the patrimony of all Guyanese …. They are and will continue to be used for the benefit of present and future generations … So, we are the trustees, we hold this land in trust, it is not ours to destroy,” President Granger pointed out.

The apprenticeship programme was started by Minister of Natural Resources, Hon. Raphael Trotman, who aims to positively introduce the sector to interested young Guyanese, who may have an interest in this field.

“The plan is to have them fall in love with their country,’’ Min. Trotman told the Department of Public Information.