The campaign is a collaborative effort between the Guyana Police Force, the Guyana National Road Safety Council (GNRSC) and the Media. It aims to encourage all road users to decline from driving drunk, designate a driver and to restrict the escalation of road accidents; as well as reaching the United Nations Decade of Action for Road Safety of a 50 per cent decrease in fatal accidents by 2020. 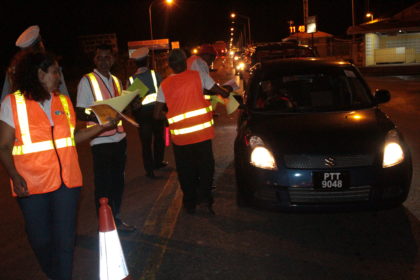 The White Knight operation being conducted at Vreed en Hoop as members of the Guyana National Road Safety Council and the Guyana Police Force raise awareness sharing fliers to drivers.

The Department of Public Information /Government Information Agency (DPI/GINA) was at the Vreed en Hoop location where one of the operations was being conducted and spoke to GNRSC Coordinator Ramona Doorgen. The re-launch of the programme was due to the tremendous success coming out of the pilot programme which was launched last November, Doorgen said.

According to Doorgen, when the programme was launched in November 2016, there were only six deaths as compared to 15 deaths for the same period in 2015. The GNRSC Coordinator pointed 0ut  that, “this is why we know that having this campaign more rigorously throughout the country on the hype that we had it in November, we might not even have 100 persons dying on our roads this year”.

Doorgen noted that the reason the campaign has been so successful has mainly been due to the approach taken. She said that while the campaign is based on enforcing the laws, it also seeks to educate the public about dangerous driving.

Assistant Superintendent (ASP) Forbes Browne, the Officer- in -Charge of the operation said that the public has been very receptive to the campaign thus far. ASP Browne explained that , “apparently persons are adhering and we have not had any cases where persons diverted from the road block… we tested most of them (drivers) we recognised would have been in any way suspicious and our response so far is good, seems as though persons are adhering to the proper code of driving”.

ASP Browne pointed out that, it is a plus for the West Coast, noting that from the beginning of the year a number of pedestrians, most of who were over the age of 50 lost their lives. However, he stated that the traffic department has taken the necessary steps which saw a reduction of accidents on the West Coast over the last two months. 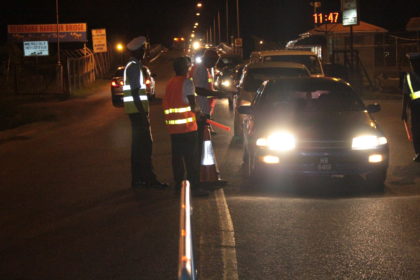 Members of the Guyana National Road Safety Council and the Guyana Police Force interacting with a driver of an ongoing vehicle as part of the White Knight operation.

drivers were compliant with the campaign. Kathan noted that “most of the drivers have been very cooperative, they understand the fatality figures that we have and they are quite cooperative in every way and they showed concern and appreciation for the exercise”.

Kathan also pointed out that aside from the White Knight campaigns, they will be conducting a number of awareness exercises. “Very shortly we are going to start lecturing to schools in the process of education, we are doing meetings and seminars with drivers for the different (car & bus) parks and taxi services” Kathan explained.

The Campaign entails road blocks, which are setup at different locations across the country. Prominent citizens such as, traffic officers from all divisions, executive members of the GNRSC, government ministers, the Commissioner of Police, the association members and all citizens who feel they can make a difference by raising the level of awareness and reducing  the prevalence of drunk driving on the road ways.